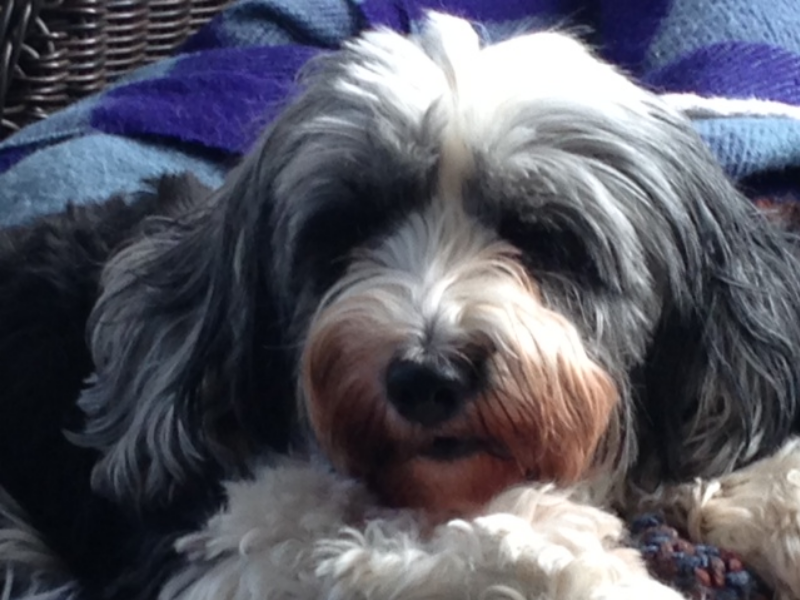 One of our greatest pleasures of working with animals at WestVet is celebrating the successes.

Recently we received a message from Diana regarding her beloved dog, Mariah, and eye surgery for cataracts. Mariah, a Tibetan Terrier (Dhoki Apso) will soon celebrate her 13th birthday.

Adopted at age 7, she and Diana have formed a tight, loving bond. At age eight, Maria was diagnosed with diabetes, and then one year later, at just nine years old, this sweet girl was seen at WestVet by Dr. Carrie Breaux, a board certified veterinary ophthalmologist. It was discovered that Mariah was suffering from severe cataracts. In fact, it was clear that Mariah’s vision was severely impaired.

According to DogBreed.com, the Tibetan Terrier is a breed that traditionally lives up to fifteen years—so Mariah had half her life still ahead of her. After a consultation and thorough exam from Dr. Breaux, Diana says she decided to pursue the surgery so that Mariah could “see the beautiful world as long as possible.”

The cataract surgery was a success! Diana says she knew immediately it had been successful because as she arrived at WestVet to get Mariah and take her home, Mariah heard Diana’s voice and spun around to see this person she loved – and had only seen as shadows before. This phenomenon continued at home, as Mariah would hear a familiar voice she would quickly turn around and a get a good look at the face of the people she had loved for years.

Over the past few years, Mariah has received follow-up care. She and her family do not live in Boise, so Dr. Breaux works with their family primary care veterinarian to monitor her progress.

Mariah’s owner had this to say about the successful cataract surgery that changed their families’ life, “The thoughtful care and concern over her eyes and general physical condition, has never wavered. Every day I marvel at what was possible and that Dr. Breaux, her team, and I were able to restore Mariah’s sight.  It’s a gift I know she appreciates!”

We are delighted that Mariah is enjoying the sights of her humans and the world around her.