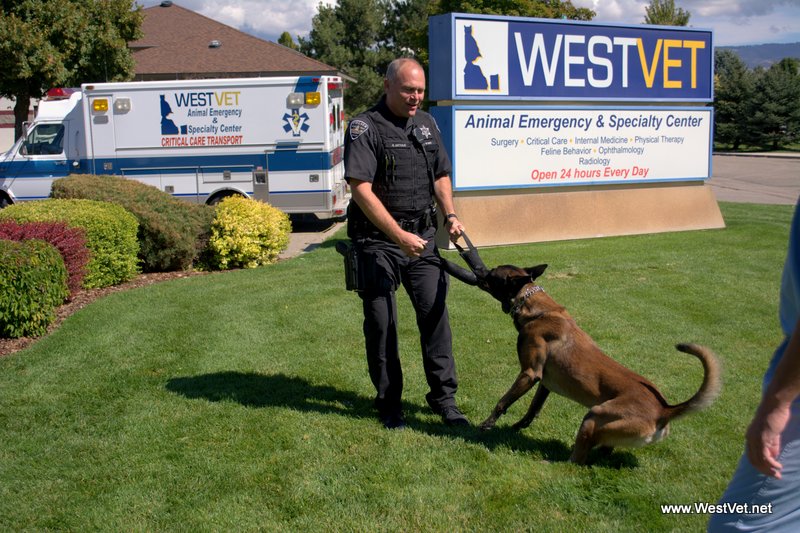 The partnership provides police dogs who serve in the Treasure Valley with optimal veterinary care; the goal is to help area canine officers fulfill their duty and beyond as they enjoy retirement.

Financially, the average expense for one dog is up to $9,000. In addition, the dog undergoes lengthy training. Typically, a canine officer begins working around age two and a half and will work for about 7 years.

Keeping these dogs healthy during their service is the goal that inspired a partnership with the BPD, Animal Medical Center, and WestVet.

Dr. Nell Dalton, a veterinarian at Animal Medical Center, and Dr. Andrea Oncken, emergency and critical care veterinarian at WestVet, evaluated why canine officers were either retired early or died. They determined the most common reasons were either chronic arthritis or “bloat.” Bloat, also known as gastric dilatation-volvulus (GDV) syndrome, is an ailment that is almost 100% preventable.

Gastric Dilatation-Volvulus (GDV) occurs when a dog’s stomach fills with gas and twists in on itself obstructing blood flow to abdominal organs. This is a serious condition that may be fatal if not promptly treated with surgery.

While bloat could happen to any dog, it is most common in deep-chested, large breeds, such as the Akita, Great Dane, German Shepherd, Belgian Malinois, and St. Bernard. 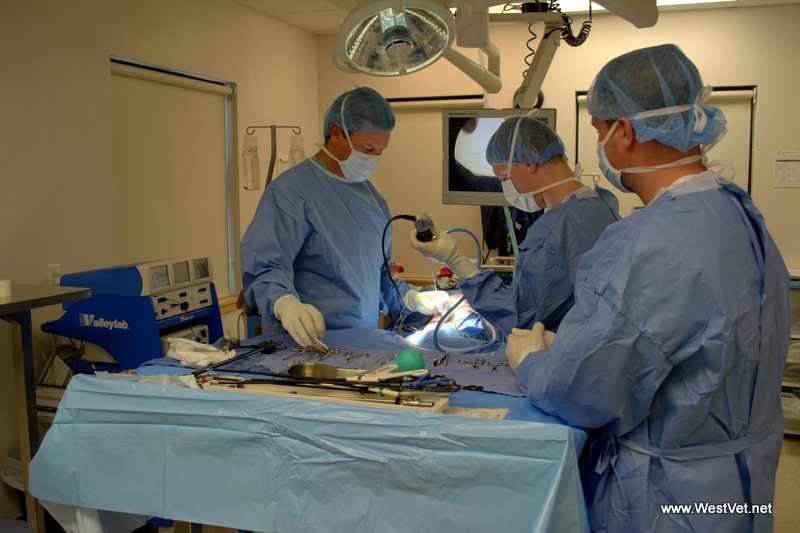 He says several factors determine are considered before an LAG procedure. “We look at the breed, the depth-to-width ratio of the dog’s chest cavity, the level of activity, and the dog’s temperament. Increased anxiety and nervousness is an added risk factor,” Dr. Chandler said. “Police and military working dogs have a high adrenaline, high anxiety job adds to their risk.”

LAG is a less invasive procedure and is performed as an outpatient surgery. Dogs are only out of service for about ten days, as opposed to four weeks for major abdominal surgery.

“Using the scope means that downtime is minimal, and it’s much less invasive, so post-surgical risks are decreased,” Dr. Dalton said. “Doing the procedure made a lot of sense for the long term prognosis and well-being of these canine officers.” 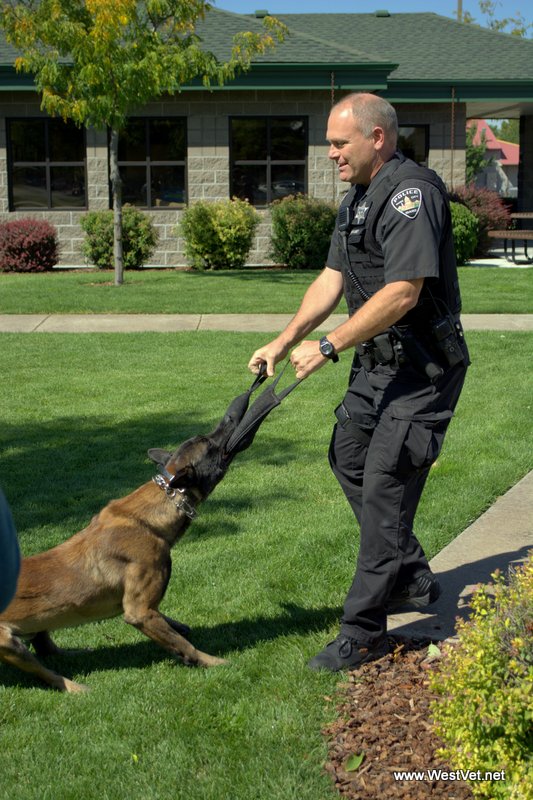 He says that in a recent study for police dogs around the country, one in ten suffered from GDV, and, “In the Treasure Valley, we are overdue for a case.”

Officer Arthur says BPD considers the dog’s long-term prognosis, the cost of the LAG preventative procedure versus the cost of care should the dog bloat, the downtime following the surgery, as well as the fact that, often, if working dogs do recover from bloat they may not be serviceable following treatment. “Overall, the preventative cost is very minimal. We can have all seven canine officers undergo LAG for the same cost as treatment for one dog who bloated. We look at LAG as another tool to keep our officers safe, as we are out there keeping citizens safe.”

Good preventative care and routine veterinary exams and treatment are the goals for the BPD, WestVet, and Animal Medical Center. Dr. Chandler discounted the surgical fees to ensure the dogs are treated for a fraction of the cost of an emergency bloat surgery.

Dr. Dalton says it is a privilege and an honor to provide annual care to the canine officers and it’s a real treat for all the staff at Animal Medical Center when the dogs visit. 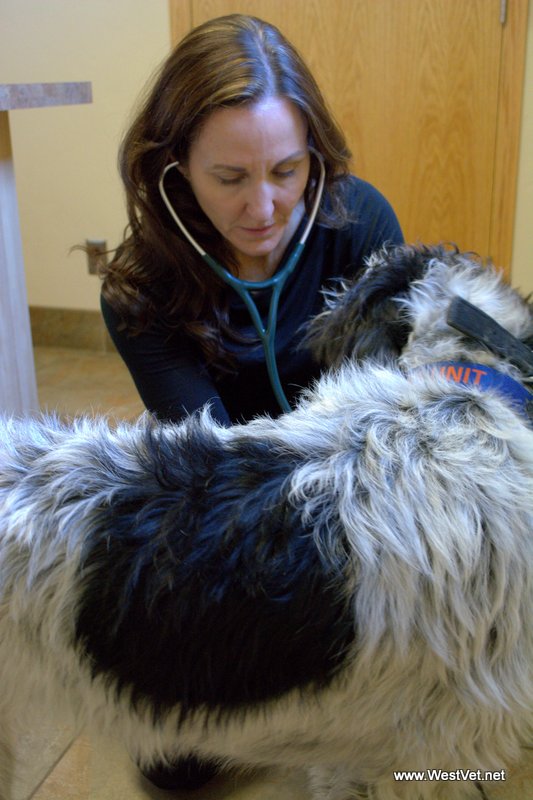 “If I can help our officers with this one tool, I feel like I’m helping keep all of us safe. We can focus on maintaining good health for the canine officers and not have to worry about bloat.”

Currently, seven four-legged officers serve with the BPD. As of October 2015, all seven canine officers have undergone a successful LAG procedure at WestVet. Up next, Scout, the recently adopted rescue dog, and mascot, will be evaluated for the procedure. WestVet also recently performed the LAG procedure on one Twin Falls Police Department canine officer, with a second to be scheduled in the near future. In addition, Drs. Chandler and Dalton are communicating with other law enforcement departments in Idaho about the procedure.

The inspiration for this partnership stemmed from one local amazing canine officer. 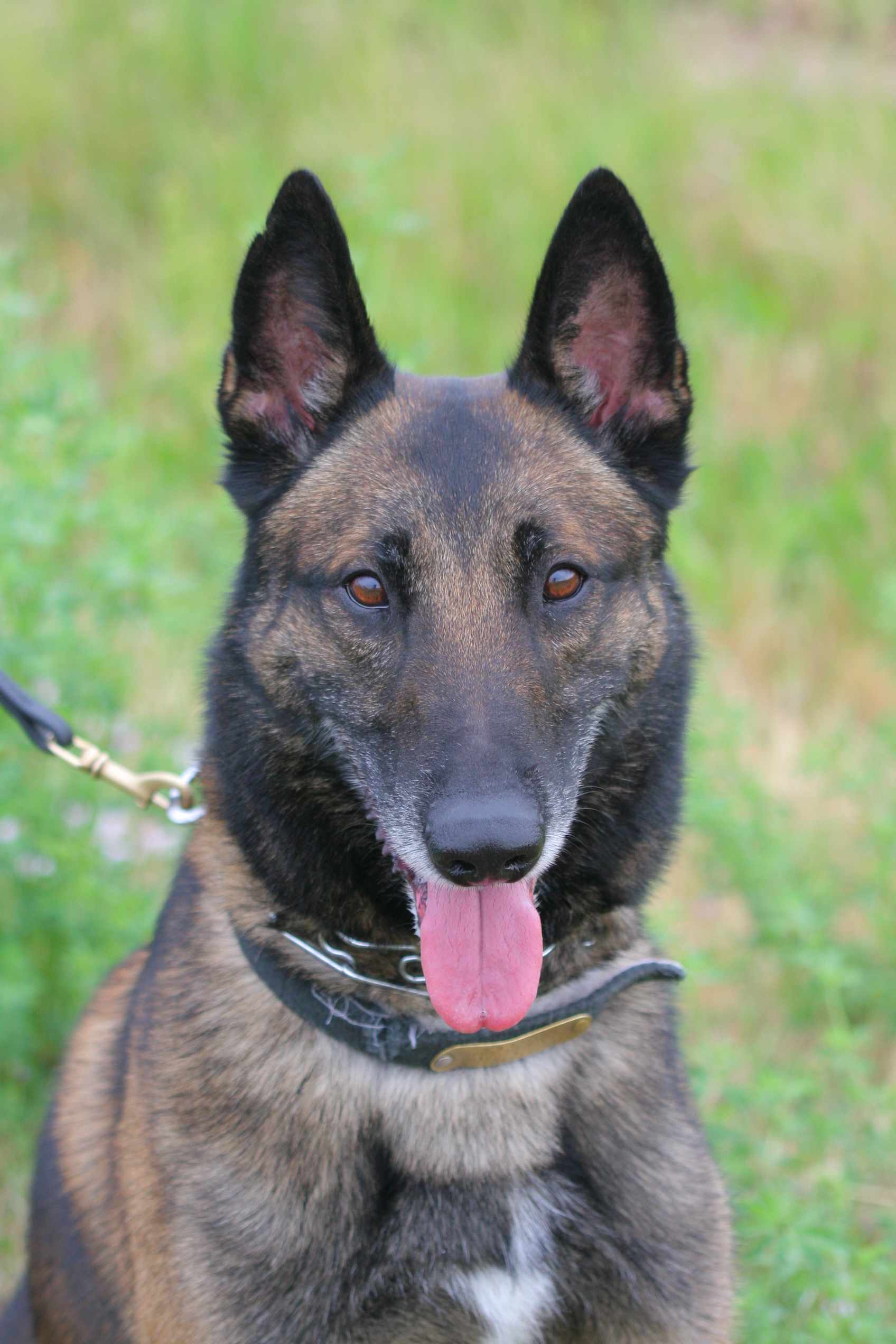 Bullet, a Belgian Malinois, and Garden City Canine Officer, recently passed away. His legacy and service brought area police departments, veterinarians, and specialists together to provide the best care available for these four-legged officers.