Puppies at WestVet! C-Section Saves Life of Mother and her Newborn Pups 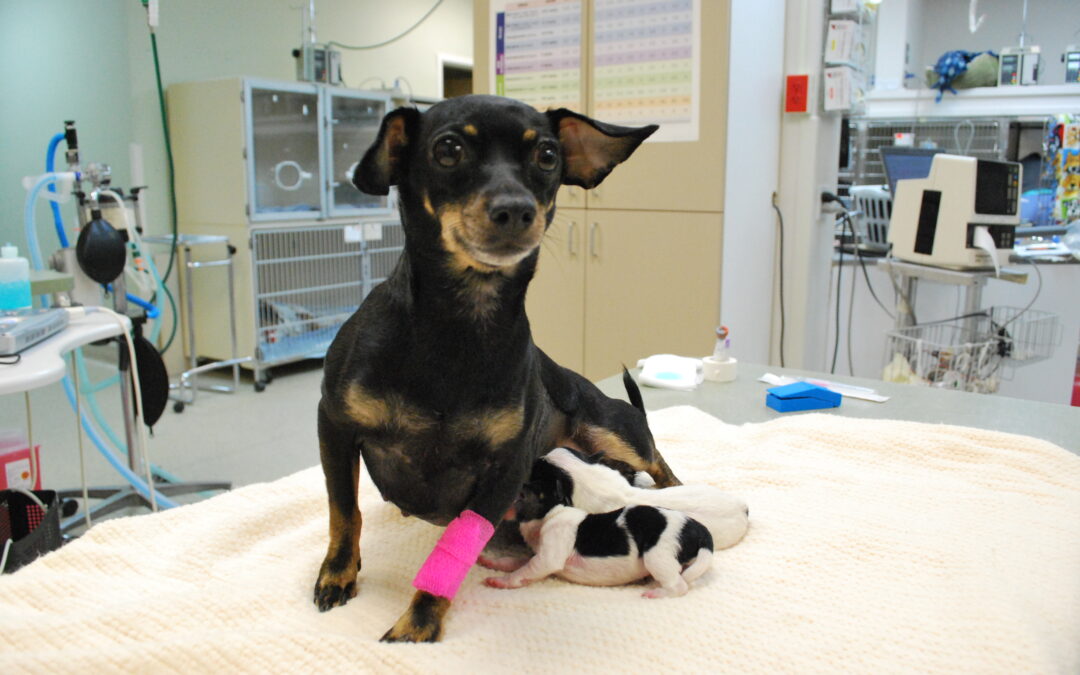 Working in a 24-hour Veterinary Hospital means that there are a wide variety of patients, ailments, and injuries that require care. There are often reasons to celebrate and earlier in April was one of those times. “Bebe,” and her owner Melissa, visited the hospital when Bebe was having complications during birth. This is their families’ story.

Melissa rescued “Bebe” as a Christmas present in 2010 from Ramona Animal Haven in San Jacinto, California. Bebe is a “mix” dog, the shelter presumed that this 9-pound little girl had some Chihuahua and Daschund in her lineage. During the adoption process Melissa was informed that Bebe had been spayed a few weeks earlier, and as she was bearing a surgical scar on her belly, Melissa believed that to be true. 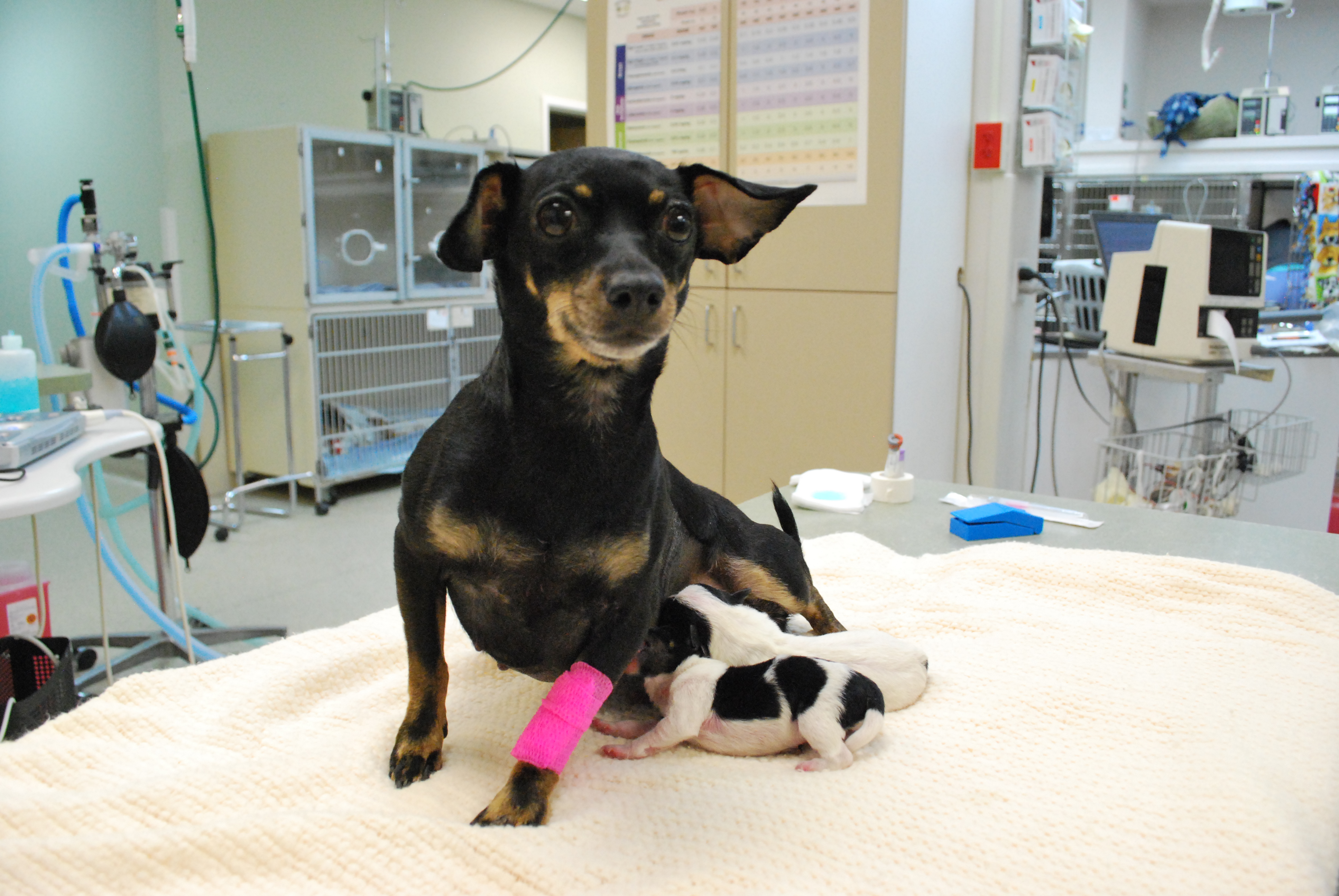 They were out of state, visiting family and with another dog in the house, Bebe became pregnant.

“I was very concerned when a few weeks after I returned home, Bebe started gaining weight. She is a very small dog and I knew that the male dog that had been near her was twice her size.”

Melissa spoke to her family veterinarian in Caldwell. After radiographs (x-rays) revealed Bebe was carrying four puppies, they determined that the puppies were small and that they could safely continue with the pregnancy. Then, on an April Saturday afternoon, Bebe went into labor. Melissa called her family vet and as their office was closed, she was referred to WestVet. She says she was very concerned when the labor did not seem to be progressing.

“After 30 minutes, the puppy had not delivered so I brought her to WestVet. The staff members were so kind and helpful. They delivered the first puppy however, it did not survive.”

Dr. Jennifer Pearson, ER Veterinarian, was the attending doctor who delivered the first puppy and performed CPR in an attempt to resuscitate it. Then, as Bebe’s labor continued, Dr. Curtis Brandt, ER Veterinarian, phoned Melissa to update her on BeBe’s condition. 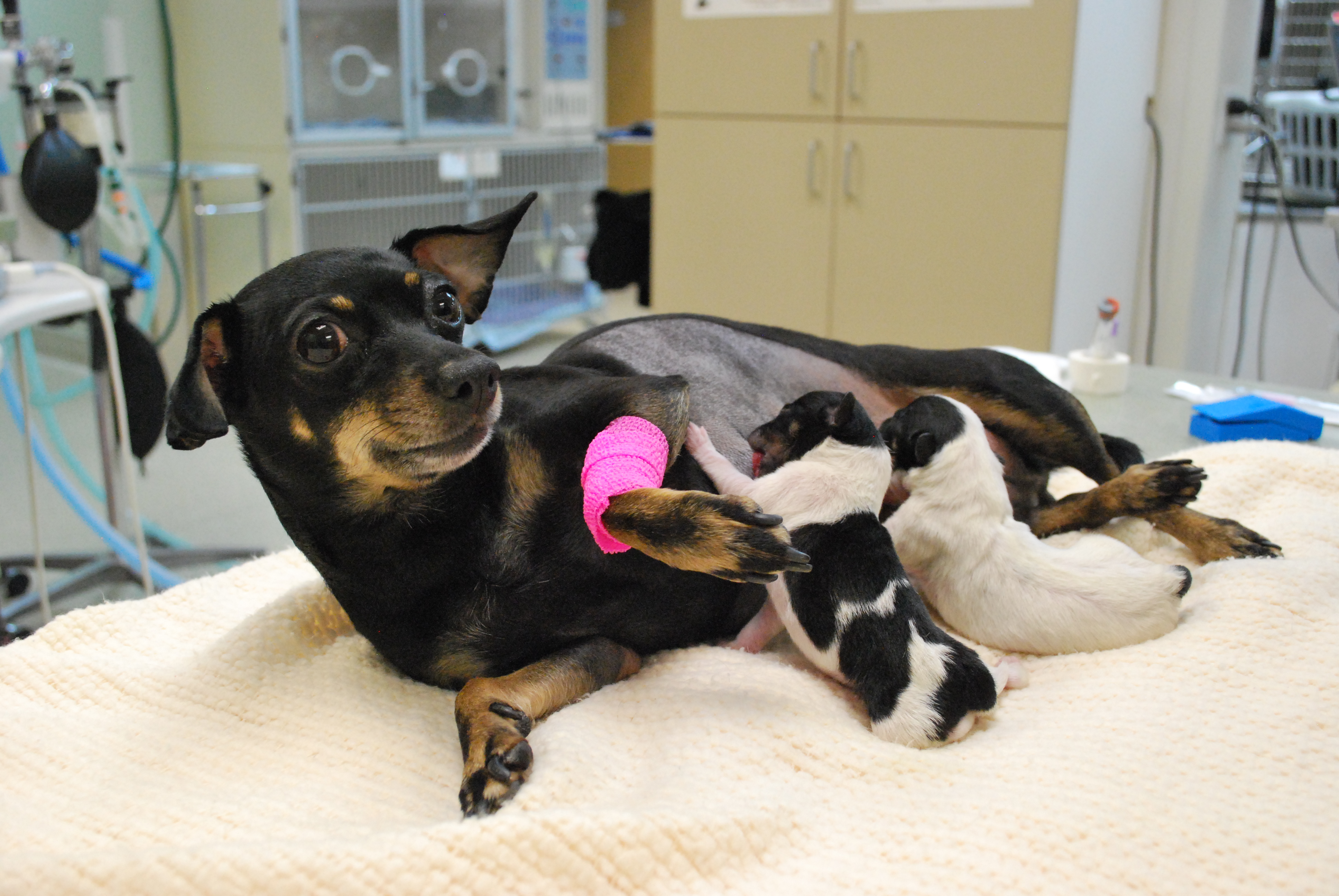 Melissa says that with Dr. Brandt’s advice, she determined that it would be in Bebe’s best interest to pursue a caesarean section for the remainder of her delivery. Dr. Brandt successfully delivered two live puppies, a male, and female. (A fourth puppy also did not survive.)

Dr. Brandt said this about the experience,

“Any time we’re dealing with a dog giving birth, the decision process about when to proceed to c-section can be tricky. Bebe had already surprised her owner several times in the last few months by going into heat and becoming pregnant after she was supposed to be spayed. It turned out she’d saved one last surprise for the medical team. Her uterus had become twisted below the fourth puppy, probably within a few hours prior to the onset of labor, and she simply wouldn’t have been able to complete the birthing process herself. Because Mrs. Henderson was prepared to deal with complications, the process of moving forward with surgery went smoothly and the outcome was very good. In the context of the challenges of veterinary emergency care, nothing is more fun than sending home brand new, healthy puppies.”

Melissa said this about Dr. Brandt, “I know that he saved Bebe’s life that night. Without Dr. Brandt, she would not have survived.” She also reports that Bebe is a doting and loving mother to “Prince” and “Princess” and that this unexpected surprise has, thankfully, become a joyful experience.