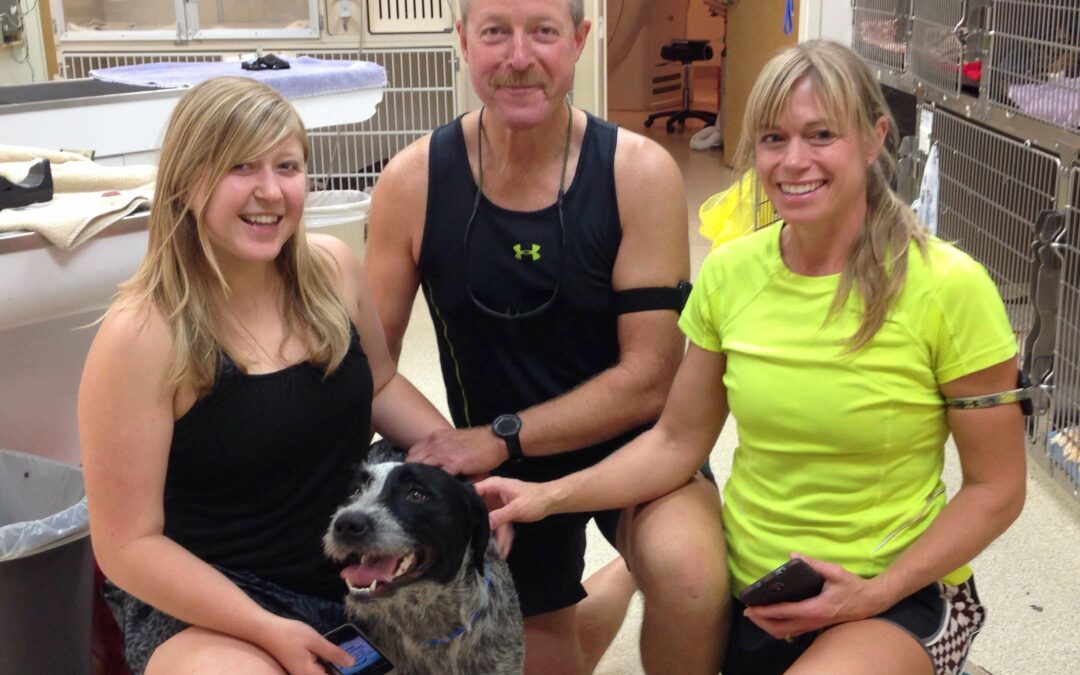 Thanks to the emergency veterinary care and the love and dedication of her wonderful people, Mochi has been restored to good health and her happy, joyous life.

We have many WestVet stories that inspire us, but Mochi’s tale is one of our favorite. 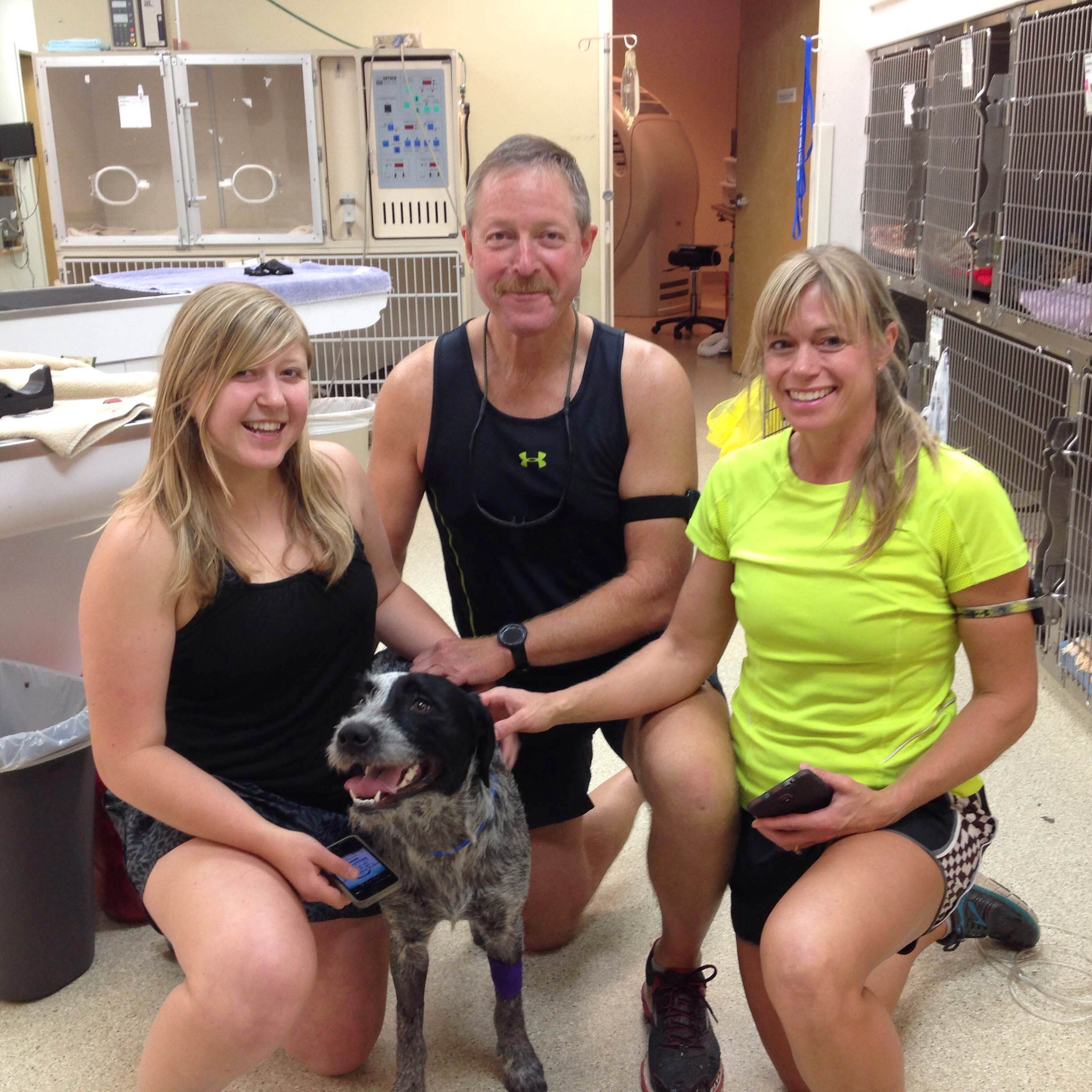 A few weeks ago, just as summer was launching, Mochi, a Drahthaar mix, was outside with her owners, Chris and Kit; their daughter and son-in-law, Megan and Kevin; and two companion dogs. They were all enjoying a Sunday run in a rural area near Eagle along a familiar road the group had visited numerous times before. (Pictured right, left to right, Megan, Chris, and Kit with Mochi at WestVet.)

The three dogs, ‘Mochi,’ ‘Ani’ and ‘Roxey’ could not resist the ditch filled with water and—as all had previously proven to be avid swimmers—Chris and Kit allowed the dogs to go for a swim. That’s when things went terribly wrong; here is Kit’s story:

“We were only five minutes from the car when disaster struck…after jumping in and out of the ditch, Ani and Roxey returned to us, but Mochi did not. We called her name, paged her collar, still no response. We were alarmed, as this behavior is very unlike Mochi, who is an obedient and eager-to-please dog.

Chris looked at the ditch and said, “She wouldn’t be in there?” I ran to the left side/incoming culvert, Chris ran right, to the outgoing culvert. Miraculously, he saw her orange collar and lifeless body in the water. It seemed the culvert had sucked her in, and with no grate on the intake and no space to breathe while under the road, Mochi had been trapped.

Chris leapt into the water and scooped her up. On the opposite bank, I held Ani on the leash and began sending prayers up to God. 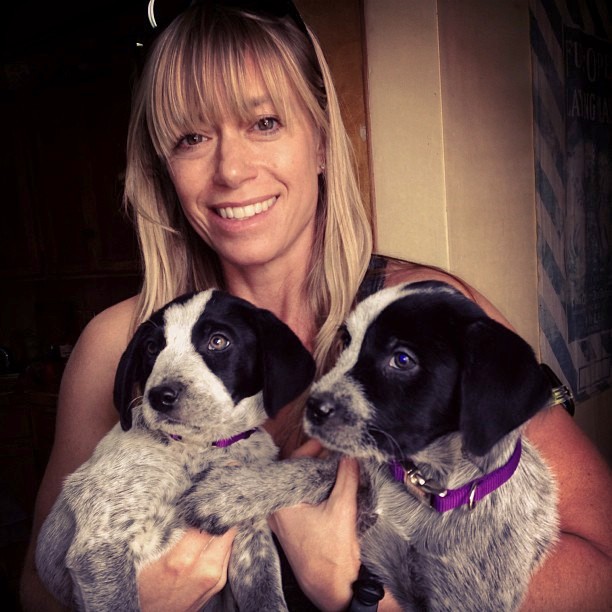 We had buried Mochi’s sister just four months ago after she was hit and killed on the road near our home. I felt I was reliving the nightmare of carrying her body back to the house. (Pictured right, Kit with Mochi and Nani as puppies.)

Megan and Kevin were immediately at Chris’s side performing CPR. He began compressions while the two of them began breathing for her. Mochi had a slight seizure, coughed a little, and began to come around. As the men were loading her into the car, Mochi was clearly struggling to breathe, choking, and bleeding, but alive.

I hopped in the back seat to hold her and phoned our family veterinarian. The answering message directed emergencies to WestVet. When we saw another vet hospital along our route, they also directed us to WestVet and even called ahead for our arrival. When we pulled up, staff members took Mochi right to the back and started working on her.”

Having suffered a near drowning, Mochi was in extremely critical condition. She was sedated, and given oxygen, but her condition was so severe that it required she be put on a ventilator. We were amazed and inspired by the love of the family and friends that came to our hospital to support Mochi and her people. She was continuously surrounded by love—something that certainly aided her recovery.

“It helped us to know that while we were at work, a family member had been with Mochi. When we visited, in part or as a whole family, she knew we were there, she felt our kisses, heard our familiar voices, knew we loved her, knew we were fighting for her and that she had to stay connected with us and fight for her life and come home to us,” Kit wrote to us.

Mochi remained on a ventilator for 48 hours. This allowed her lungs to slowly recover while stabilizing her oxygen level and breathing rate. She continued on oxygen therapy for two additional days, becoming stronger almost hourly. Four days after the accident, Mochi was released and returned home–just in time to celebrate Kit’s birthday.

Several components of Mochi’s journey were critical to her survival. First, Chris had the physical strength to pull an unconscious dog from under flowing water. He and Kit co-own the ATA Martial Arts Center & Karate for Kids in Eagle and he is in excellent shape. Second, everyone in the party was CPR-certified and able to assist Mochi with emergency breathing. Finally, they immediately pursued emergency veterinary care. In her condition, Mochi would not have survived without medical intervention.

Kit tells us that the one word that describes Mochi is “love,” she continued,

“[Mochi] filled the hole that was left in our heart when our dear Belle passed away.

She is sweet, sensitive, strong and loving.  Mochi has always loved to be close, snuggle, and will hop up on your lap and give kisses…especially if her sister is getting in trouble. She is protective, just days before the accident she came to us whining because her sister and gone through the collar/fence and was stuck on the other side and couldn’t get back over.”

Kit concluded her email with this:

“I truly believe that God puts people in our path for a reason and I know that Mochi is so grateful for the staff at WestVet.  She knows they helped bring her back from heaven!  Words cannot express how thankful we are and how much we appreciate what the doctors and staff have done for our Mochi and for our family!”

This beloved dog and her sweet family continue to inspire us and we thank them for entrusting her care to us.