Meet “Tyson,” a Boxer puppy treated for a Heart Condition and Fractured Leg 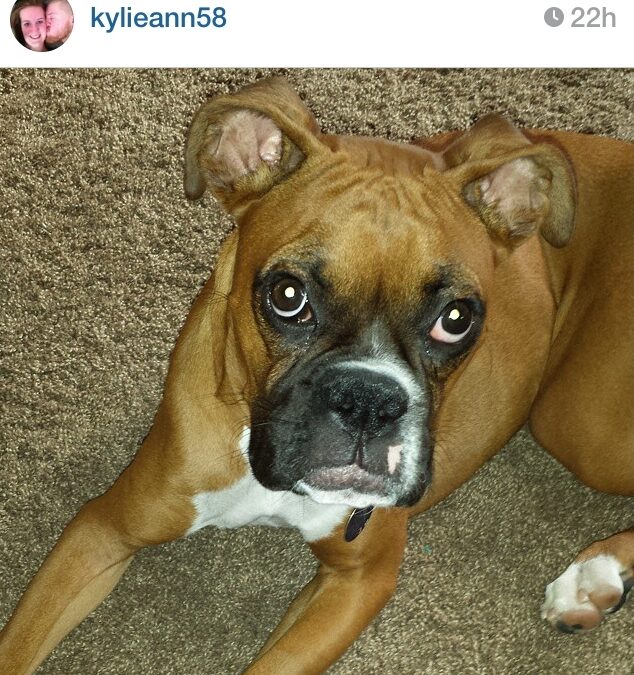 Tyson, the Boxer puppy, is a fighter (just like his namesake) that won our hearts after two separate treatments at WestVet.

This sweet, serious face belongs to “Tyson,” a Boxer puppy who visited WestVet recently—and stopped all of us in our tracks. 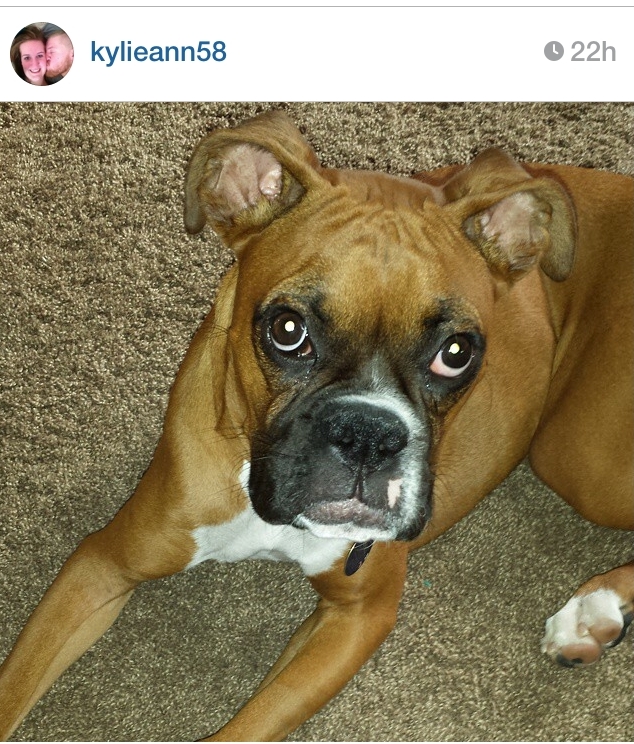 Tyson has overcome a few different medical challenges, and we are delighted to share his story (and some of his sweet pictures) in our blog today.

First, the story of how Tyson found his way to his new family Kylie and Adam, as shared via email from Kylie:

“We were looking for a puppy that fit our personalities, one that would be not only fun but like a child to us. Originally when met the litter of five Boxer puppies, we wanted a brindle-colored pup, but in this litter, all the brindles were female. As we played with the puppies, Adam picked up the only male and fell in love. 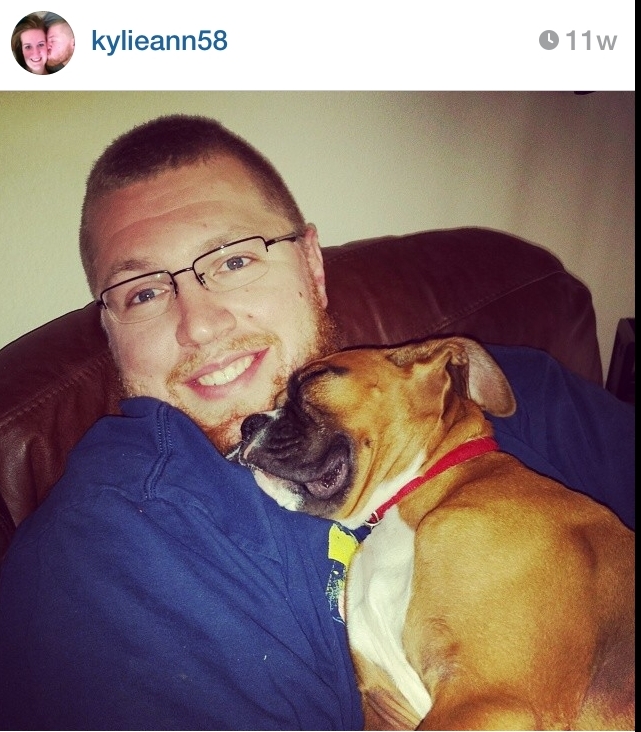 Adam handed me the pup and he instantly nibbled my nose. We both knew in that moment that we had found our puppy! We named him ‘Tyson,’ as a reference to Mike Tyson, the (human) boxer.”

Adam and Kylie describe Tyson as loving, bouncy, and a “little crazy.”

“With Tyson in the house there is never a dull moment,” Kylie wrote. “He has become our little furry son. He has changed us and made us more responsible. Tyson turned Adam into a softy. He had claimed to be the tough one until Tyson came into our lives. Now Adam is the one that has the hardest time saying ‘no’ to Tyson.”

Tyson and his people visited WestVet early in the summer after a referral from Broadway Veterinary Hospital. Their family veterinarian diagnosed him with heart failure, and Tyson was treated by Veterinary Internists Dr. Dan Hume and Dr. Victoria Ochoa. With this condition he has a good prognosis; Adam and Kylie have been told that he will live into early adulthood.

Just as they were getting settled with Tyson at home, he suffered an injury after jumping out of a car that was traveling twenty-five miles per hour. 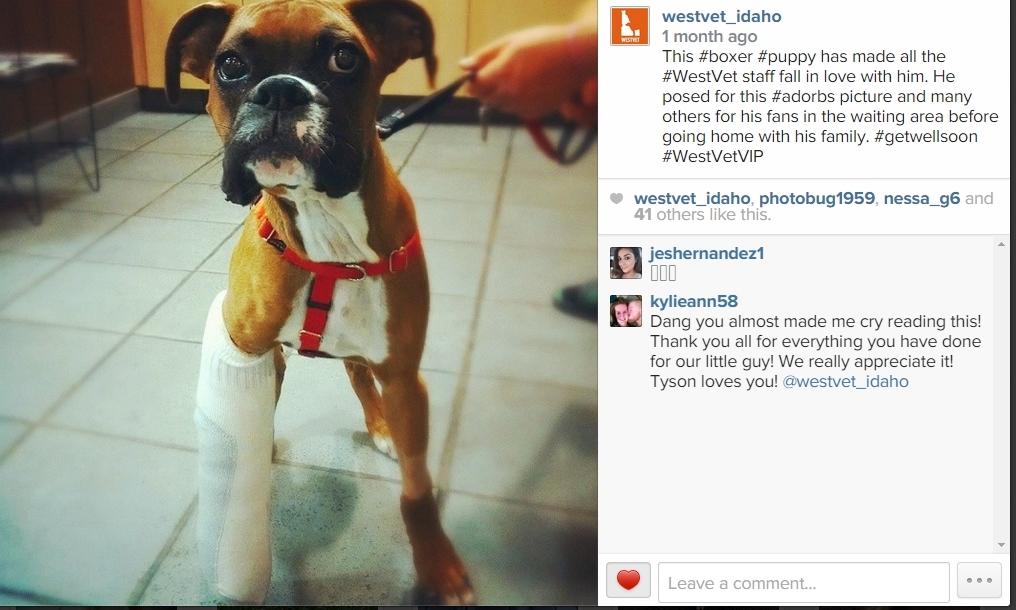 This time, it was a broken leg. Tyson visited our animal hospital several times for bandage changes and progress reports on his healing. We were always glad to see his sweet little face in the lobby and give him some extra love.

Tyson has since healed from this unexpected injury. He continues to grow, learn new things, amaze and adore his people. Kylie shared some thoughts for other pet owners whose animal friends may be ill:

“Give them the best possible life. There is nothing like seeing them happy and playful. When Tyson is himself, it makes everything that we have gone through and will continue to go through worth it.”

We thank Adam and Kylie for sharing their story with us and for entrusting WestVet with Tyson’s care. 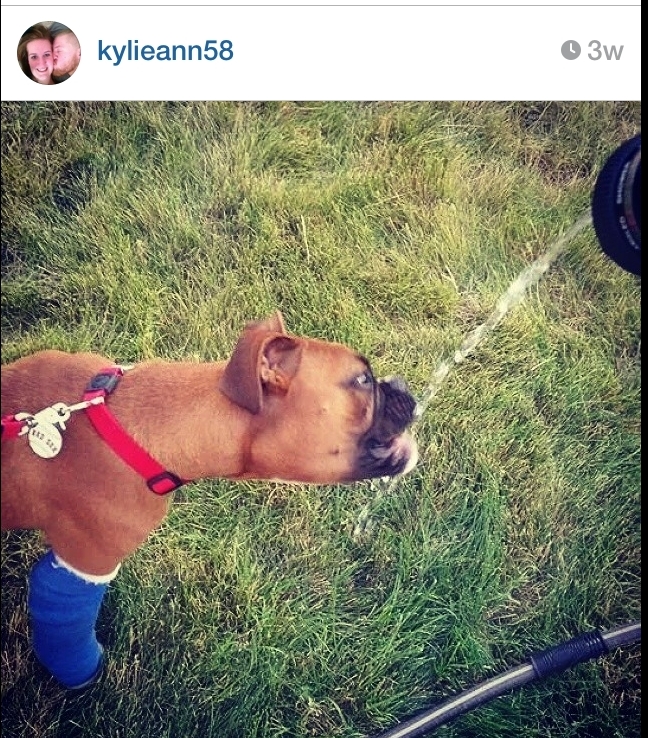 His energy, enthusiasm for life and cuddly mischievousness has been a joy for us to work with. You can watch him grow, too. On Instagram, Kylie shares lots of pictures and updates; you can find her under the user name ‘kylieann58.’ We have shared a few of his Instagram pictures with permission of his people.