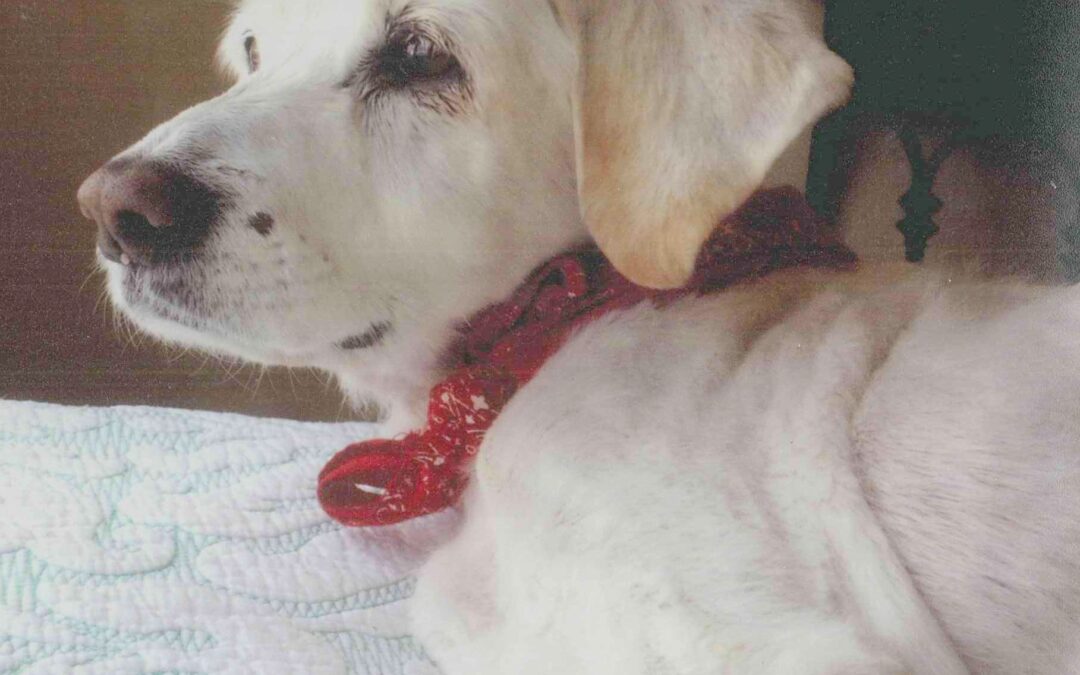 A tribute to a rescued dog, a rescued human and the wonderful bond they shared. Meet Carolina, a veterinary cancer and surgery survivor.

We love working with pets and, in turn, have the opportunity to meet the most amazing people. 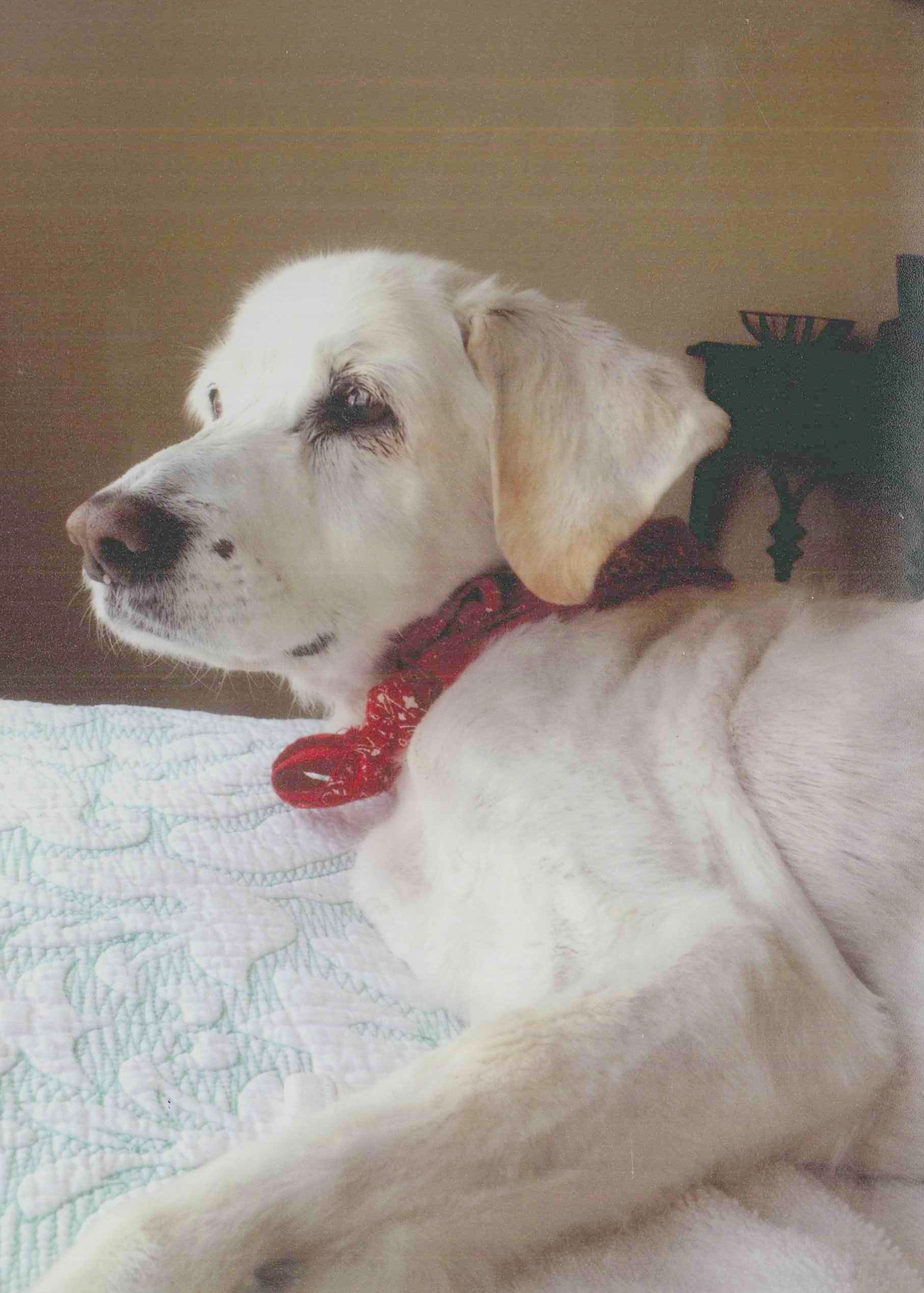 Not long ago a beautifully framed picture of Carolina. a gorgeous yellow lab mix, was presented to Dr. Chandler. When we asked her owners if we could share her life story on our website and below you’ll find a biography—as told by Carolina herself.

We are sharing this story in its entirety as written by her owners. This beautiful girl lived a full, rich life and we know that she is deeply missed.

My name is Carolina the Wonder Girl. My Momsty first brought me to WestVet in late September of 2001. 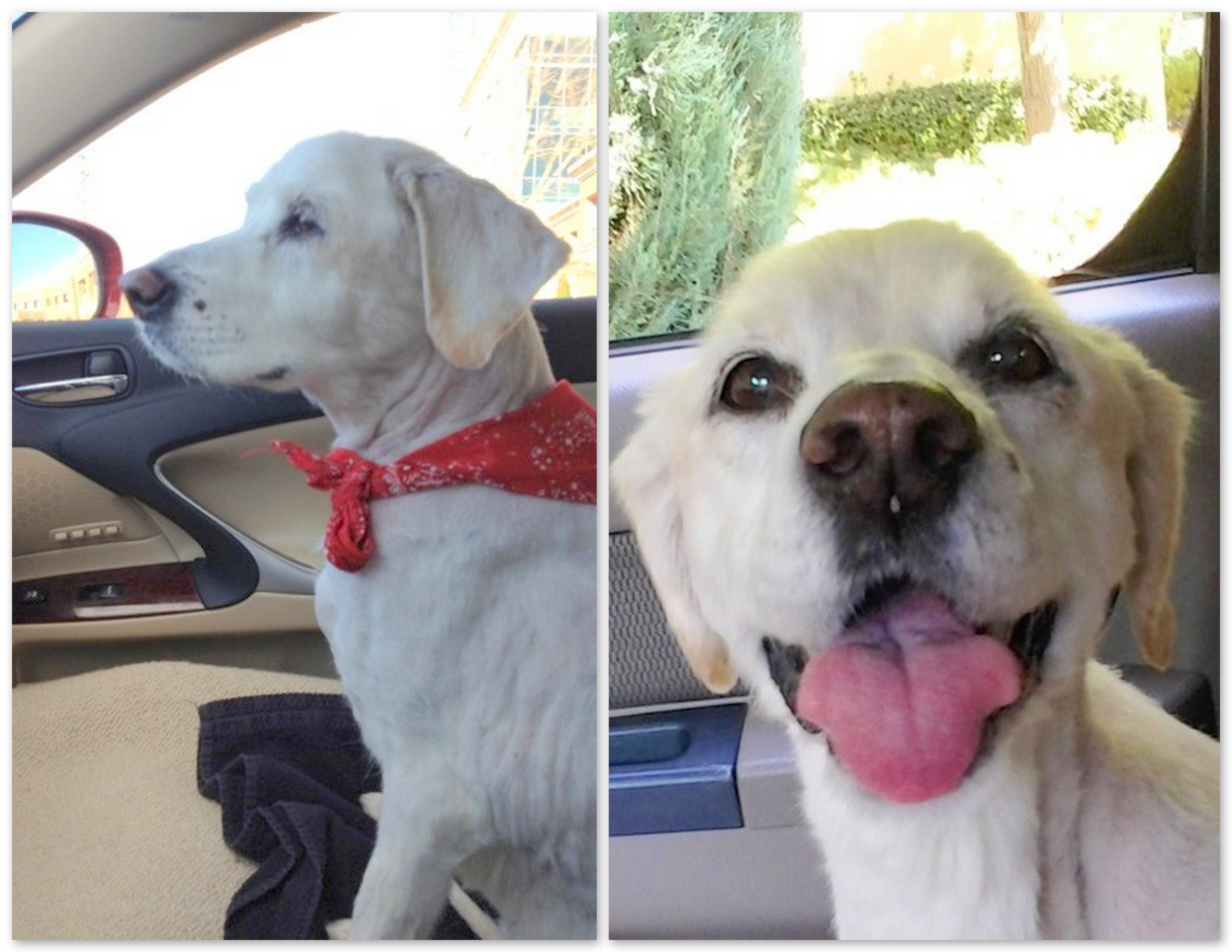 We had traveled for a week across the country and I developed a bad case of pancreatitis after being accidentally fed some human food that was probably too greasy. I was very proud to be Momsty’s stalwart co-pilot on our trip from South Carolina to Idaho. Momsty had accepted a job in Idaho and we had driven for about 5 days straight – just the two of us. We stopped at the state line markers so Momsty could take my picture as we crossed into new states. It took longer than an ordinary cross-country trip because I needed to have scamper breaks every several hours.

I was named for the state in which I was born. My littermates and I had been abandoned near a barn in rural South Carolina. As luck and destiny would have it, Momsty was anchoring a TV newscast in Columbia, South Carolina, the state capitol. It was a beautiful TV station with satellite trucks and even a helicopter. There was a segment on Fridays called, “Pet of the Week.” Dogs, cats and puppies like me from the local pound were brought in and showcased in hopes of finding us a home and thereby saving us from being euthanized at the pound. After meeting dozens of adoptable puppies each week, the day Momsty first laid eyes on me she knew there was something special, almost mystical about the small white puppy who sat quietly assessing my surroundings. I didn’t squirm or bark I simply sat there quietly looking at all the bright lights and the big cameras. I’ll always remember how nice Momsty smelled. Not nice like the dead things I rolled in every once in a while but a different kind of nice, like flowers. I knew in my little soul that Momsty and I would be together for a long time and would develop an unbreakable bond. I knew I was meant to take care of her as much as she would take care of me. I knew that in the vast universe our spirits had found each other and were brought together for a greater purpose.

Over the years most people agreed that I was a mix between yellow lab and Beagle. Google searches for Yellow Lab/Beagle mix reveal dogs that look exactly like me.

Everyone always said I nbsp;had such a sweet face and they always complimented my deep brown eyes lined with little white eyelashes. My fur was so soft and white and I had a faint yellow line of fur that extended down my back. Momsty always said I looked like a baby otter. Even when I got older people always thought I was a puppy. Just like Momsty.

I was an alpha dog but a gentle dog. When little children in the park accidentally hit my head or pushed me or tried to climb on my back I would hold very still and be very gentle because I intuitively knew that small humans were delicate creatures who liked to frolic like puppies.

During my puppy years and even into my early teens I was a strong willed dog. I simply did what I wanted to do. Luckily Momsty determined that was part of my unique personality so she adapted. No one could fault her because I was well behaved and sweet. I learned to “gimme five” with each paw, to sit and to retrieve my squeaky duck and other stuffed toys. The concept of “stay” really never meant anything to me though.

I was very happy when in 2006 Momsty introduced me to her friend Joel who would become my forever Dadston. When he was a little boy he had a beagle so he taught Momsty many things about the “way of the Beagle,” including the fact that there was something called the Beagle autonomy zone. That meant that while I loved my people very much I didn’t really want to be snuggled too tightly or restrained because I was a free spirit. It also meant that sometimes when we were on our walks I would have to insist that we go left even when Momsty wanted to go right.

One day Momsty and Dadston noticed a big lump on my left paw. When they took me to see Dr. Chandler he said it was metastatic cancer. He operated and removed that big lump that was draining all my energy but it came back twice as we feared it would. Momsty was heartbroken that I had to have my entire leg taken off but I showed her what an amazing girl I was by learning how to run again several weeks after my major operation. When I was recovering Dadston took me to WestVet every other day to have my bandages changed. I couldn’t have survived without him.

Before I became a tripod I used to love to go for long walks along the river. The unpaved path is just 214 steps from our front door and I would be let off my leash to run and sniff and explore to my heart’s content. I often found stinky things to roll in. They smelled really good to me but Momsty would bring me home and wipe me off until the lovely fragrance was all gone. I also used to like to jump over the tree trunks that had fallen across the path, just like a little pony.

I loved to go for rides in the front seat of Dadston’s truck and Momsty’s car. I always sat up straight and always assessed the surroundings.

I was a very lucky girl really. I spent many summer months on a boat on a mountain lake. Before I left South Carolina I would run and jump in the ocean chasing after waves.

In Idaho I went for countless Sunday drives with Dadston. Dadston is a pilot and always said I was his “first officer.” He would take me on errands when it wasn’t too hot in the truck. I never liked baths but Dadston would take me to “spa days” and gently shave and bathe me. While I never enjoyed those oatmeal baths at the do-it-yourself groomer I knew that Dadston was very patient and exceedingly gentle and afterward I could speed around the living room wiping off that oatmeal smell on the carpet. When Dadston was not flying he took me to Baggley Park every morning at 9 AM sharp. He never missed a day. He always talked to me and always made sure I had cheddar to go on top of my kibble.

I had so many funny nicknames over the years. I was called Liney, or Baby Girl, or Baby G, which then morphed into BubbaG and then G’lette. Occasionally I was called G’slinger. I also had my own bedroom. Every day when Momsty went to work I would lay on my bed that had been pushed up next to the big window and watch for kitties or nap. It’s what Momsty and Dadston called being on vigil. When Momsty came home from work she would always look up, and there in the window was my eager, pretty white face. I would stand up and wag my tail and be overcome with joy. I’d jump off that bed and race to the top of the stairs. I did this even when I was a 3-legged girl much to Momsty’s dismay. She was afraid I would hurt myself. I always knew how important it was to wait for Momsty’s arrival. Over the years she always told me before she left – “I’ll be back. I love you.”

I died in my Momsty’s arms at 2:35 on Sunday December 8, 2013. Momsty was holding me tight and I felt safe and protected. Dadston was holding me too and looking right into my eyes.

I remember feeling very sleepy. That was very good because my little body was hurting. I didn’t want to leave my Momsty because I knew she needed me to love and protect and care for. I knew I was her Forever Girl. Momsty was right there holding me and I felt her hand on my heart when I took my last breath and my brave lion heart stopped beating.

My friends at WestVet put me inside a small white coffin box. They were so nice to place my little body on a red blanket to match the red bandana I always wore. Momsty and Dadston put letters inside my little coffin and pictures of me that they held dear. Dadston dug a perfectly symmetrical little grave on the coldest day of the year. He dug through the frozen ground and made sure my grave was tidy and nice. I love the beautiful stone carving they placed on top of my grave.

Now every day I can see Momsty when she looks out her bedroom window on my little grave. Sometimes Dadston comes to my grave and talks to me. I hope they know I’ll always be with them. I always knew how much they loved me.

Thank you to Dr. John Chandler, Dr. Jeff Brourman, Dr. Victoria Ochoa, Dr. Laura Lefkowitz, Dr. Jacob Ewing, Dr. Sami Pederson, Dr. Carrie Breaux, and Dr. Andrea Cannon.  Thank you to Raelynn and all the lovely and kind techs who kept me safe and healthy for all those years. I’ll keep an eye on you guys as well. Whenever you see a butterfly – that’s me saying hello.